Want to Teach English in Brazil?

Brazil is the world’s fifth-largest nation, and contains within it all the diversity one would expect: dazzling beaches, lavish forests, diverse and colorful communities. Rio de Janeiro is among the most cosmopolitan centers in Brazil. The vast, modern metropolis perches between stunning beaches and graceful mountains. Magnificent views are everywhere, especially at sunrise.

The four-week training course includes 140 hours of classroom time and a minimum of 6 hours of observed Teaching Practice with local EFL students.

The Training Center, located in Rio, offers fully modern facilities in a historic downtown building. The completely renovated Center includes nine classrooms with audiovisual equipment, central air conditioning, phone and fax services, and access to e-mail and the Internet. Close to many bus stops, only two blocks from the subway, and within walking distance of dozens of local attractions, the Center is conveniently located.

The TEFL Certification Program Fee in Rio, Brazil is US$1,995

Accommodations during the four week program are available with a host-family near the Training Center for an additional cost of US$1,200 (private room, includes two meals per day). A limited number of shared apartments are available for $900. You can expect to share the apartment with a Carioca (native of Rio).You will have a private room, and must prepare your own meals. Airport transportation (one-way) can be arranged for $100.

If you are interested in brushing up on your Portuguese and learning more about your new location, you have the option of 6 hours of complimentary virtual language classes, given over Skype. These can be done at your convenience, either before or after the course (and since they are virtual, they can be done regardless of your location!). 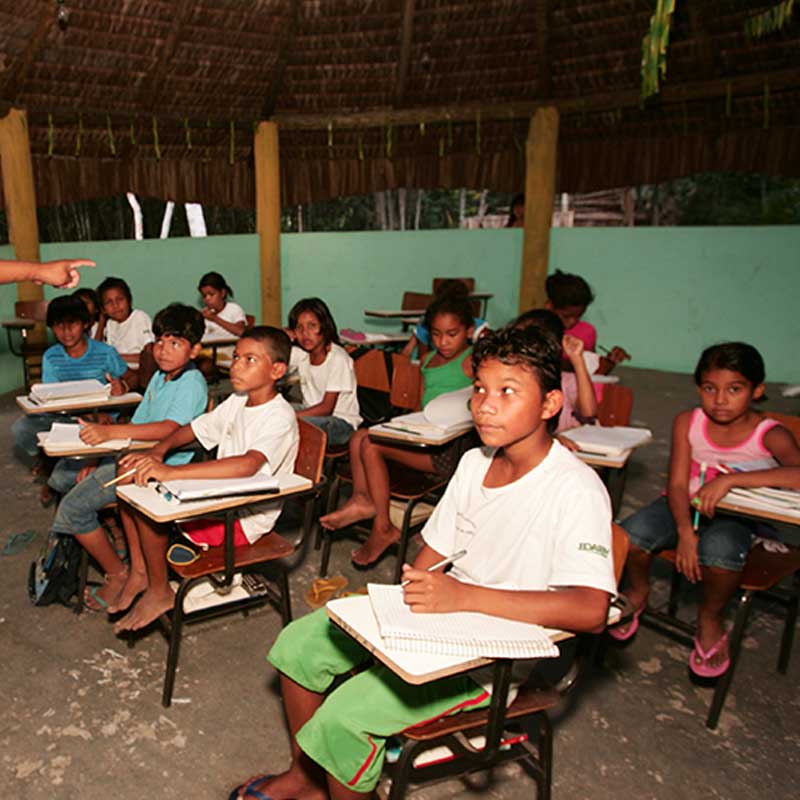 Most EFL students in Rio are working professionals who need to improve their English to advance their careers. They are highly motivated, accomplished, eager to learn, and rewarding to teach. Most classes in Rio are held at private language institutes and are quite small. Teachers get hired year round, although the peak hiring season is March through August. Please note that it will be extremely hard to find any language schools with open doors during the famous Brazilian carnival. This is also when Brazilians have their Summer vacation.

Brazil is the largest country in Latin America and all of the big cities are loaded with students and business professionals who want to study English to increase their chances of a better future. There is a great demand for teachers in Rio de Janeiro, Brasilia, Sao Paolo, Porto Alegre and Belo Horizonte. There are also opportunities to teach in the more rural areas of Brazil, but it’s important to understand that financial resources are less available here. For this reason many teaching opportunities in these areas are voluntary.

Due to Brazil’s visa policy, most teaching contracts are 6 month agreements (see Visa information). Contracts are typically part time, so many teachers work for 2 different schools, or supplement their hours with private classes. There are many opportunities for private tutoring in Brazil, both in-person and online. Most teachers work around 25 hours per week.

We recommend teachers to be in Brazil for their job search. Most schools will want to interview you in person. In very few occasions, a Skype interview is possible.

A TEFL, TESOL or CELTA certificate is needed for teaching English in Brazil and makes you very marketable as a teacher. A 4-year degree is preferred, but not required. The demand for English teachers is simply too high. Having a business degree can be helpful when teaching advanced speakers of English in a business setting.

The average salary for English teachers ranges from $800 to $1400 a month, based on a 25-hour work week.  Teaching private classes is always a lucrative way to make extra money. Depending on your experience, you can charge anywhere between $12 and $28 an hour. Prepare for your monthly expenses to range between $800-$1400 in Brazil, so you should be able to break-even financially, although you probably won’t be able to add much to your savings. Prices have increased quite a bit lately.

Many restaurants offer buffets where you pay by weight. Restaurants offering regular menus are usually more expensive. Budget meals are typically US$4-10, while higher-end restaurants charge US$10-20. Housing prices highly vary per location.

Travel for the program

Unlike most other Latin American countries, you must apply for a tourist visa in advance to travel to Brazil. Please check visa regulations with your local embassy as the requirements vary per nation.

Getting a work visa in Brazil will not be easy as you will need to find a school that wants to sponsor you and apply for a visa with the Ministry of Labor on your behalf. This is an expensive and time-consuming process that most schools don’t want to go through. The most common practice is to stay in the country on a tourist visa and accept cash-in-hand positions at a private institute. You might also be able to teach private lessons in person or online. A tourist visa only allows you to stay in the country for 180 days, over a 12-month period. Some teachers overstay their visa, however, you will have to pay a fine for every extra day that you stay in the country.

If you want to stay in Brazil long-term, you must find an employer willing to sponsor you and start the visa process. This visa will only allow you to work for the employer who applied for this visa on your behalf. The criteria are quite strict–all documentation needs to be legalized and translated into Portuguese. It can take up to three months to obtain a work visa.

Brazil is the world’s fifth-largest nation, and contains within it all the diversity one would expect: dazzling beaches, lavish forests, diverse and colorful communities. Brazil borders with all South American countries, except for Ecuador and Chile!

Rio de Janeiro is among the most cosmopolitan centers in Brazil. The vast, modern metropolis perches between stunning beaches and graceful mountains. Magnificent views are everywhere, especially at sunrise.

Although Rio is also the headquarters to some of Brazil’s largest national and multinational companies, the city is renowned for its festive atmosphere, especially during the five days when Rio comes to a virtual standstill for Carnival. During this time, parties, dancing, colorful costumes and floats, and parades of quick-footed samba dancers fill the streets.

The Training Center in Rio offers the best of old and new: fully modern facilities in a historic downtown building. The completely renovated Center includes nine classrooms with audiovisual equipment, central air conditioning, phone and fax services, and access to e-mail and the Internet. Close to many bus stops, only two blocks from the subway, and within walking distance of dozens of local attractions, the Center is conveniently located.

It’s probably Brazil’s most famous symbol; the gigantic white statue of Jesus Christ overlooking the city of Rio de Janeiro. You will not be surprised that the dominant religion in this country is Christianity, with 65% of Brazilians considering themselves Catholic. Brazil’s cities offer a unique culture shaped not only by the religion, language, and European heritage of the Portuguese, but also by considerable African, Indigenous, non-Portuguese European, Arabic, and Asian influences. This huge South American country is the home of many different nationalities and cultures.

When you think about Brazil, you think carnival, Samba, soccer and the World cup, colors, tropical fruits, caipirinhas, beaches, and the Amazon rain forest, but did you also know that Brazil covers three time zones and that it’s capital, Brasilia, was constructed in only 41 months? Did you know that the Christ the Redeemer statue is one of the Seven Wonders of the World? And, that Osama Bin Laden-themed bars are somewhat of a trend in Brazil? Another factor to consider about Brazilian culture is the tight-knit familial relationships. Adults often live with their parents until they get married, and elderly relatives usually move in with their children when they are not able to take care of themselves anymore.

Lunch is the most important meal of the day for Cariocas (Rio de Janeiro inhabitants). While there are a number of cuisines native to this vast country, \”churrasco\” (eclectic barbecued meat) is almost universally popular, as is feijoada, a hearty pork and bean stew.

Supper is normally a lighter meal than lunch, while breakfast typically consists of a cup of coffee and a slice of bread with butter or cheese, or perhaps fruit.

A 10% tip is customary at restaurants and bars, and it often comes included in the check. Tipping other services is at your discretion.

Visitors to Rio should not drink water straight from the tap. Most people have water filters in their homes, and it is safe to drink from them. While on the street, drink bottled water. It is similarly not advisable to eat food that was cooked on the street.

Vegetarians are relatively rare in Brazil, though fresh fruits are widely available (acai berries are reputed to be incredibly healthy).

As Rio de Janeiro has a tropical climate, the lightest practical clothing is advisable. A jacket or sweater might be required some evenings in spring and fall, while winter sees the need for comfortably warm clothes that can be worn inside and out (central heating is almost nonexistent in Brazil).

Brazilians dress quite casually by American or European standards, though when teaching or enjoying an evening out you will want to don business casual attire.

Rio de Janeiro tugs visitors two ways on a daily basis: white sandy beaches in one direction, lush green mountains in another. In between can be found one of the world’s greatest social scenes, set to the rhythm of samba and the annual schedule of carnival.

Beyond the city lies the famous Pantanal nature reserve, home to a huge percentage of all of the animal species found in the Americas; the Iguazu Falls–the largest waterfalls on the planet–and one of the most beautiful wonders. In addition, Brazil maintains the vast Amazon river and rainforest.

For those interested in exploring the more urban aspects of Brazil, head north to learn capoeira, or south to Sao Paulo, one of the world’s largest cities and South America’s fashion capital.